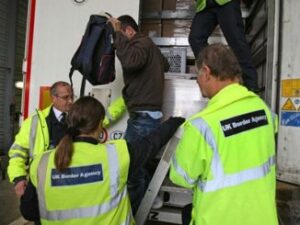 Hauliers will stop bringing goods into the UK if the government ploughs on with proposals to levy fines of £2,000 per stowaway found in vehicles, regardless of the security measures taken, Logistics UK has warned. A consultation into the controversial plans ended yesterday (6 May) with ministers wanting to overhaul the current clandestine civil penalty… END_OF_DOCUMENT_TOKEN_TO_BE_REPLACED

Peterborough, UK: The UK’s ongoing driver shortage, and the new changes to IR35 (off-payroll working) tax rules, have created a perfect storm for the logistics industry, according to the Road Haulage Association. The RHA’s comments came as the Grocer reported that driver shortages are now having an effect on deliveries to convenience stores. “The driver shortage was… END_OF_DOCUMENT_TOKEN_TO_BE_REPLACED

“Last week, I put 73 hours in. You’re not getting home through the week,” Craig Hoodless says of his job behind the wheel of a truck. “After a full day’s driving you’re mentally knackered but physically fine. Being a long-distance driver has to be a job you love. You can’t do this job if you… END_OF_DOCUMENT_TOKEN_TO_BE_REPLACED

The government is set to introduce COVID testing for lorry drivers entering the UK from mainland Europe, Sky News understands. The Department for Transport has not confirmed the move, but sources have told Sky News that hauliers crossing from France will be included, with the potential for other European countries to be impacted as well…. END_OF_DOCUMENT_TOKEN_TO_BE_REPLACED

Following an industry meeting between representatives of the Driver and Vehicle Standards Agency (DVSA), Logistics UK and commercial driving schools last week, the Agency has announced that driver training will be able to recommence as soon as the second part of the relaxation of lockdown measures occurs, which is widely expected to be Monday 12… END_OF_DOCUMENT_TOKEN_TO_BE_REPLACED

Following the adjustment to the IR35 legislation on the 3rd March 2021, it seems clear that HMRC are intent on implementing the changes as planned this time around. These final ‘tweaks’ to IR35 mean that any remaining grey areas are closed and any room for manoeuvre is removed. In essence these final adjustments to the… END_OF_DOCUMENT_TOKEN_TO_BE_REPLACED

HMRC have issued new advice aimed at helping operators stay on the right side of new tax laws. The document, which can be found here, lays out how HMRC will monitor organisations engaging drivers and other contractors who work through their own limited company when new tax rules kick in. It states that: The off-payroll working… END_OF_DOCUMENT_TOKEN_TO_BE_REPLACED

Is HGV activity back to Pre-Covid levels? The transport and logistics sector has seen a turbulent 6 months with certain sectors powering forward through lock down and others going into a short-term state of hibernation. In mid-April, HGV traffic levels dropped by 45%. Now, 6 months on, official government statistics show that consumer purchases of… END_OF_DOCUMENT_TOKEN_TO_BE_REPLACED

Chief treasury secretary, Steve Barclay, announced last night that the IR35 tax reforms would be pushed back by one year, less than a week after the controversial measures were confirmed in the Budget. Speaking at the despatch box in yesterday’s Budget debate in the Commons, Barclay confirmed that the changes, which will clamp down on… END_OF_DOCUMENT_TOKEN_TO_BE_REPLACED

HM Revenue & Customs recently released this IR35 factsheet to outline the changes to off-payroll working rules. The information below was taken from this document and is relevant to HGV drivers and clients in our sector. Changes to off-payroll working rules (IR35) – There are some important changes to employment taxes coming into effect from… END_OF_DOCUMENT_TOKEN_TO_BE_REPLACED

I am looking for HGV Drivers

This website uses cookies to improve your experience while you navigate through the website. Out of these, the cookies that are categorized as necessary are stored on your browser as they are essential for the working of basic functionalities of the website. We also use third-party cookies that help us analyze and understand how you use this website. These cookies will be stored in your browser only with your consent. You also have the option to opt-out of these cookies. But opting out of some of these cookies may affect your browsing experience.
Necessary Always Enabled
Necessary cookies are absolutely essential for the website to function properly. This category only includes cookies that ensures basic functionalities and security features of the website. These cookies do not store any personal information.
Non-necessary
Any cookies that may not be particularly necessary for the website to function and is used specifically to collect user personal data via analytics, ads, other embedded contents are termed as non-necessary cookies. It is mandatory to procure user consent prior to running these cookies on your website.
SAVE & ACCEPT